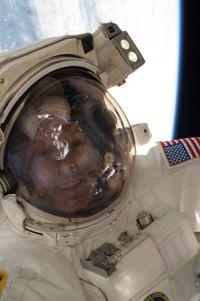 An evening with Astronaut Steve Swanson

NASA Astronaut Steve Swanson returns home to Steamboat Springs to share stories and photos from his six-month tour of duty on the International Space Station during 2014.

On March 25, 2014, Swanson and fellow crewmates Alexander Skvortsov and Oleg Artemyev launched aboard a Russian Soyuz rocket from Baikonur, Kazakhstan for the International Space Station. During his six-months aboard the orbiting laboratory, Swanson performed various Earth remote sensing and biology, bone and muscle physiology studies. In May 2014, Swanson assumed command of the station with the departure of Expedition 39 Commander Koichi Wakata. Expedition 40 concluded on September 10 with a safe landing in central Kazakhstan, marking an end to 169 days in space that covered almost 72 million miles in orbit.

This program is presented by the Bud Werner Memorial Library in partnership with the Steamboat Ski & Resort Corp.

Photo courtesy of NASA: With a blue and white portion of Earth below him, NASA astronaut Steve Swanson, Expedition 39 flight engineer, is pictured during a spacewalk to replace a failed backup computer relay box in the S0 truss of the International Space Station on April 22, 2014. He was accompanied on the spacewalk by fellow Flight Engineer Rick Mastracchio of NASA.