An Evening with Photographer Jordan Matter

Wednesday, February 22, 2017 - 6:30pm to 8:00pm
Dancers After Dark is an amazing celebration of the human body and the human spirit, as dancers, photographed nude and at night, strike poses of fearless beauty.

A talk and slideshow with the photographer of the New York Times bestselling book Dancers Among Us, sharing the stories behind his new collection, Dancers After Dark.

Dancers After Dark is an amazing celebration of the human body and the human spirit, as dancers, photographed nude and at night, strike poses of fearless beauty. Without a permit or a plan, Jordan Matter led hundreds of the most exciting dancers in the world out of their comfort zones—not to mention their clothes—to explore the most compelling reaches of beauty and the human form. After all the risk and daring, the result is extraordinary: 300 dancers, 400 locations, more than 150 stunning photographs. And no clothes, no arrests, no regrets. Several of the published photographs were taken in the Yampa Valley.  Matter returns to Steamboat Springs to talk about this passion project, the stories behind his compelling photos, and what else he's been working on. 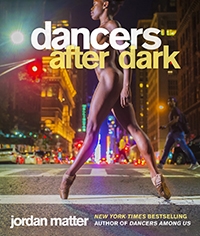 About Jordan Matter
For Jordan Matter, photography really happened by chance. He never planned to be a professional photographer. Actually, playing baseball occupied the first two decades of his life – and after college, he delved into acting. But photography? His grandfather, Herbert Matter, was a highly successful photographer, with projects commissioned by President Kennedy, Vogue, National Geographic and Harper’s Bazaar, and he spent much of his childhood with him in his darkroom. His father, Alex Matter, is a gifted film director whose work has been seen at the Venice Film Festival. His mother, Paula Feiten, was a successful Ford model. Being around a camera was definitely in his blood.

Today, Jordan Matter is a portrait photographer whose work has been featured on Today, CBS, NBC, and the BBC, in The Daily News, Time Out New York, the Huffington Post, and Slate, and on blogs and newspapers around the country and the world. His first book was Uncovered. He lives with his wife and two young children in New York.