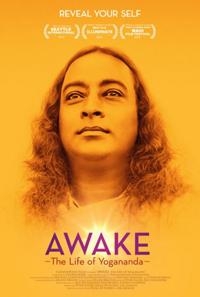 A film by by Oscar-nominee Paola di Florio and Sundance winner Lisa Leeman about Hindu mystic Paramahansa Yogananda, who brought yoga and meditation to the West in 1920 and authored the spiritual classic Autobiography of a Yogi, which became the go-to book for seekers from George Harrison to Steve Jobs.

AWAKE: The Life of Yogananda is an new documentary film about the Hindu Swami who brought yoga and meditation to the West in the 1920s. Paramahansa Yogananda authored the spiritual classic Autobiography of a Yogi, which has sold millions of copies worldwide and is a go-to book for seekers, philosophers and yoga enthusiasts today. By personalizing his own quest for enlightenment and sharing his struggles along the path, Yogananda made ancient Vedic teachings accessible to a modern audience, attracting many followers and inspiring the millions who practice yoga today.

Filmed over three years with the participation of 30 countries around the world, the documentary examines the world of yoga, modern and ancient, East and West, and explores why millions today have turned their attention inwards, bucking the limitations of the material world in pursuit of self-realization.

Archival material from the life of Yogananda (who died in 1952) creates a spine for the narrative, but the film stretches the dimensions of a standard biography. The footage includes stylized interviews, metaphoric imagery and recreations, taking us from holy pilgrimages in India to Harvard’s Divinity School and its cutting-edge physics labs, from the Center for Science and Spirituality at the University of Pennsylvania to the Chopra Center in Carlsbad, California. By evoking the journey of the soul as it pushes its way through the oppression of the human ego and delusion of the material world, the film creates an experiential immersion into the unseen realms. AWAKE is ultimately the story of humanity itself: the universal struggle of all beings to free themselves from suffering and to seek lasting happiness.

This film is a complement to the library's Yoga Reading Group discussion of Autobiography of a Yogi by Paramahansa Yogananda at 6:30 pm on Monday, April 1 in Library Hall.