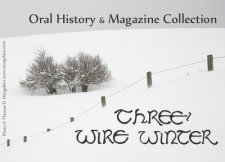 Learn more about this ambitious project that is making Routt County’s local history magazine accessible to the world. See how Routt County's historic stories can be experienced bigger than anyone might have ever imagined. Hear the voices of some of our most iconic citizens. Find the backstories you've always wanted to know more about. Meet the teachers, and some of the students, who brought this magazine to life during the mid-1970s and 1980s.

This special presentation will feature highlights of the new digital edition of Three Wire Winter, a brief history about how it came to be, and a panel discussion that includes former Steamboat Springs High School teachers Bill McKelvie and Tanna Brock sharing stories and delving deeper into this important local history project! 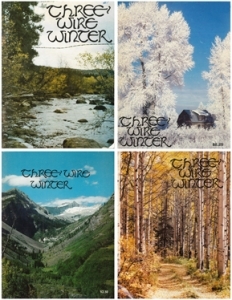 About Three Wire Winter
In 1974, Steamboat Springs High School history teacher Bill McKelvie was a member of the Steamboat Springs Bicentennial Committee, which aimed to capture the oral histories of prominent local citizens and publish them in a magazine in time for the United States' Bicentennial Celebration. Pursuing an idea modeled after Foxfire Magazine, Bill facilitated an oral history/magazine publication class during the 1974-75 school year.  A year later, grant funding and additional training grew the project. High school English teacher Tanna Brock joined the Three Wire Winter team and the first issue went to press during winter 1975-76 — just in time for the Bicentennial. For 12 years the publication delighted readers as it featured the lives and stories of Routt County citizens. In all, 24 issues were published.

When the project ended, Bill McKelvie gifted all of the Three Wire Winter records they had on file to the Tread of Pioneers Museum and asked that the museum preserve the collection for future generations. After preserving the documents and digitizing the oral history recordings, the Tread of Pioneers Museum partnered with the Bud Werner Memorial Library in 2015 in order to take this historic archive to the next level.  Starting on Sunday, March 26, 2017, Three Wire Winter and it's wealth of unedited oral history interviews, magazine articles, photos and other documents will be searchable through the library’s catalog.  In the coming year, the collection will also be featured in the Digital Public Library of America, which means this incredible local history resource will soon reach a global audience.