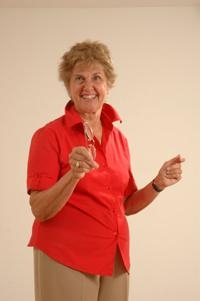 Sitting Kills, Moving Heals: How simple, everyday movement can improve the quality of your health in ways exercise alone won't.

An evening with Joan Vernikos, former Director of NASA’s Life Sciences -- an author, health coach, consultant and sought-after motivational speaker --speaking about the tangible health and economic benefits of resetting your health for life, living healthy and healthy aging.

"Joan Vernikos gives practical recommendations on how we can best take charge of our health and maintain our independence."
~ Sen. John Glenn

“The beauty of Dr. Vernikos’ plan is its simplicity. Easy, natural, everyday movements that take, literally, seconds and can provide a lifetime of benefits." ~ The Oregonian 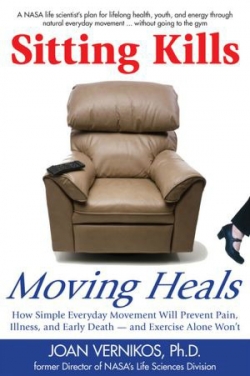 About the speaker
Dr. Joan Vernikos is a world class expert in stress and healthy aging who officially retired from NASA as Director of Life Sciences (1993-2002) following a career there as a researcher and administrator. Since that time she has committed to bringing her knowledge and experiences on healthy aging to the general public. Dr. Vernikos accomplishes this as an author, consultant, motivational speaker and personal health coach.

Dr. Vernikos' education and unique background have directly influenced her approach to the issues of health and aging. She grew up in a family of doctors, including her father, where her apprenticeship was an invaluable daily discussion of health, illness, diagnostics and case studies – at a time before it was common for powerful medicines to be the first option to treat a condition. Her education was multilingual and multicultural. Born into a Greek family in the then cosmopolitan city of Alexandria, Egypt, and educated in a British system, Dr. Vernikos completed her Ph.D. in Pharmacology at the University of London.

With her Greek husband Costas Danellis, she headed west to Ohio State University, teaching Pharmacology to medical students and doing research in brain-stress relationships. Four years later, with two children, the family moved to California, recruited by a young NASA for her stress expertise. There she pioneered research on how living in space in microgravity affected the health of astronauts. In the 1970s Dr. Joan sometimes worked behind the Iron Curtain with Soviet space scientists in a rare sharing of efforts between the two ‘enemies’.

At age 34, she was widowed, becoming a single mother. Women in the workplace were then not always given equal treatment with male colleagues. Nevertheless, Dr. Joan managed to balance work and domestic responsibilities. She continued her research and pioneered a series of “head-down bed-rest” studies used to mimic the effects of micro-gravity in test subjects. In 1978 she re-married, to Geoffrey Hazzan, and later, they took on the new challenge of opening a chocolate shop, GEOFFROI, in London, specializing in making fresh cream truffles.  The Chocolate Adventure, their book of stories and recipes. is in the making.

In 1993 Dr. Vernikos took on the role of Director of Life Sciences for NASA, a position she held until her “retirement” in 2000. There, she played a key role in the return to space of American hero John Glenn at the age of 77. She draws on this life experience to address issues seniors most commonly encounter. All her research and observations led her to conclude that managing stress and using gravity effectively hold the keys not only to healthy aging but for all of us living here on Earth. Her mission is to see this happen.

About the library's Health Perspecitves Series
This is an ongoing, once-in-an-occasional series of talks, workshops and films that brings together professional expertise in nutrition, exercise and general health for free community programs at the Bud Werner Memorial Library