Inside Perry-Mansfield's "No Hero" Artistic Residency with Choreographer Alex Ketley

Exploring what dance means...and how it is experienced by people in the American West.

Take an intimate look inside the "No Hero" Artistic Residency with choreographer Alex Ketley. In March, Ketley and his artists, Aline Wachsmuth and Sarah Woods, are residing at Perry-Mansfield to create new work. Join them for a talk, film and performance

About "No Hero"
“No Hero” was created by traveling extensively throughout the American West, with a curiosity about what dance and presentational dance means to the lives of people in these communities. The piece was developed by meeting strangers, asking them about their experience with dance, filming their stories, and then also doing small dances for them in their living rooms, diners, trailer parks, etc. The final piece is a combination of this collected film and a live dance. The piece was generously supported by the National Eben Demarest Award, The Princess Grace Foundation, and the Maggie Alessee National Center for Choreography. 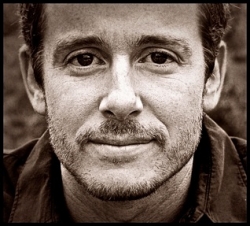 Alex Ketley is an independent choreographer and the director of The Foundry. Formally a classical dancer with the San Francisco Ballet (1994-1998), he performed a wide range of classical and contemporary repertory including the work of William Forsythe, James Kudelka, and George Balanchine in San Francisco and on tour throughout the world. In 1998 he left the San Francisco Ballet to co-found The Foundry in order to explore his deepening interests in choreography, improvisation, mixed media work, and collaborative process. With The Foundry he has been an artist-in-residence at many leading art institutions including Headlands Center for the Arts (2001 and 2007), Yerba Buena Center for the Arts (2002), The Yard (2003), the Santa Fe Art Institute (2004 and 2006), the Taipei Artist Village (2005), ODC Theater (2006), and the Ucross Foundation (2007). The Foundry has produced fifteen full evening length works that have received extensive support from the public, funders, and the press, as well as a number of single-channel video pieces that have screened at international video festivals.

Aline Wachsmuth
Aline Wachsmuth is a professional dancer, movement educator, and Certified Rolfer™. She received her B.F.A. in Dance from Florida State University, where she gained pre-professional experience working with many renowned teachers and choreographers through both the school and the Maggie Allesee National Center for Choreography. After graduating, she moved to San Francisco and worked as a dancer and principle collaborator for the company, LEVYdance, and is now working with Alex Ketley’s company The Foundry as a dancer and choreographic assistant. In 2012 Aline was honored an Isadora Duncan Award for collaborative work entitled Terra Incognita: Revisited. In 2013, she also received an Izzie for Outstanding Performance of Low Down (in collaboration with Alex Ketley, Ben Levy, and dancers). Throughout her time in the Bay Area, Aline has been actively involved as a freelance dancer to support friends and colleagues present their choreography in the community. She has taught modern dance and somatic awareness for four years at the San Francisco Conservatory of Dance.

Sarah Woods
Sarah Woods started working with Alex Ketley and Aline Wachsmuth as a student at the San Francisco Conservatory of Dance. Her first time working professionally with The Foundry was as a guest artist for LEVYdance in LowDown, a collaborative work between the two companies. She has since become a collaborator and dancer for both companies. Sarah has also performed with bay area's Sharp & Fine, and collaborated on several installation works with musician and composer Bob LaDue.

About Perry-Mansfield
PIONEERS OF IMAGINATION, SPIRIT AND PERFORMANCE
In 1913, Charlotte Perry and Portia Mansfield fulfilled their dreams of creating a theatre and dance camp in the mountains. Perry-Mansfield is recognized as the oldest continuously-operating performing arts school and camp in the nation. Throughout the years, a number of distinguished alumni, faculty, and guest artists have passed through the doors of Perry-Mansfield. Today, students from all over the world take classes from a select group of accomplished and internationally renowned faculty. The tradition of Perry-Mansfield remains unsurpassed as the camp continues to prepare emerging young artists for the stage. Recent alumni are performing with Ballet Hispanico, Battleworks Dance Company, Munich Ballet, the Paul Taylor Dance Company, Nederlands Dance Theatre, and in film, on Broadway and television.