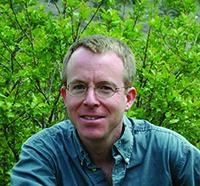 An evening with award-winning science and environment journalist, public radio broadcaster and author David Baron, talking about his new book, American Eclipse: A Nation's Epic Race to Catch the Shadow of the Moon and Win the Glory of the World.

On a July afternoon in 1878, at the dawn of the Gilded Age and the height of the Wild West, the moon’s shadow descended on the American frontier, darkening skies from Montana Territory to Texas. The rare celestial event—a total solar eclipse—had been predicted by astronomers, who coveted the brief night-of-a-day as an opportunity to solve some of the solar system’s most enduring riddles. And so, in this era of train robberies and Indian hostilities, scientists grabbed their telescopes and raced to the West. 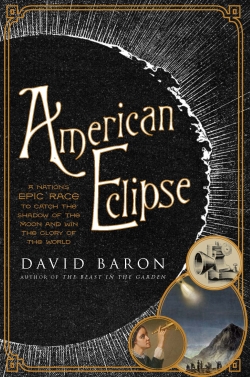 Among the intrepid band of eclipse chasers were three with much to prove. One sought to find a new planet, and what he perceived in the afternoon twilight would bring him worldwide fame and, ultimately, his own demise. Another astronomer—an exceptional woman—fought to demonstrate that science was not anathema to femininity, and her eclipse adventure would open a skeptical public’s eyes to what women could do in science. Meanwhile, a young inventor, newly celebrated, hoped to leverage the eclipse to burnish his scientific credentials, and what he learned would illuminate the world.

American Eclipse tells the story of these pioneering scientists—planet hunter James Craig Watson, astronomer Maria Mitchell, and inventor Thomas Edison—who gathered in the West with an extraordinary cast of supporting characters on a day when the sun hid and far more was revealed. An untold tale of ambition, failure, and eventual triumph, the book brings to life the intellectual and technological flowering of late-nineteenth-century America, a period that laid the foundation for the country’s eventual rise to scientific greatness.

About the author
David Baron is a journalist, author and broadcaster who has spent his 30-year career largely in public radio. He has worked as an environment correspondent for NPR, a science reporter for Boston's WBUR, and health and science editor for PRI’s The World.

In the course of his reporting, Baron has visited every continent and earned some of the top honors in journalism. These include the Lowell Thomas Award from the Overseas Press Club of America, the Alfred I. duPont Award from Columbia University, the National Academies Communications Award, and, on three occasions, the annual journalism prize from the American Association for the Advancement of Science. Baron's written work has appeared in the New York Times, Los Angeles Times, Boston Globe, Outside, Lonely Planet and Reader’s Digest. His 2003 book, The Beast in the Garden, received the Colorado Book Award.

An avid umbraphile who has witnessed five total solar eclipses, Baron has crossed the Americas, Europe, Asia and Australia to catch the shadow of the moon. On August 21, 2017, Baron will be in Jackson Hole, Wyoming, to witness the first total solar eclipse to cross the country from coast to coast in 99 years.

About the Library Author Series
Bud Werner Memorial Library presents an ongoing program of author talks throughout the year. These are free community events held in Library Hall, where a diverse award-winning range of visiting authors speak about their literary works and their writing processes. Each talk is followed by a Q&A and an opportunity to have authors sign copies of their books.