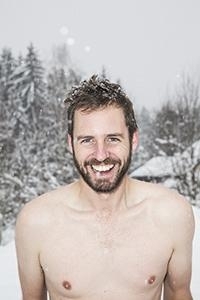 Tuesday, February 7, 2017 - 6:30pm to 8:00pm
What Doesn’t Kill Us traces our evolutionary journey back to a time when survival depended on how well we adapted to the environment around us.

Spend an evening at the library with author and investigative journalist Scott Carney talking about his new book, What Doesn't Kill Us: How freezing water, extreme altitude and environmental conditioning will renew our lost evolutionary strength.

What Doesn’t Kill Us traces our evolutionary journey back to a time when survival depended on how well we adapted to the environment around us. Our ancestors crossed the Alps in animal skins and colonized the New World in loin cloths, seemingly impervious to the elements. Modern humans have lost their biological link to the environment. Now we hate the cold. We suffer from auto-immune diseases. And many of us are chronically over weight. What Doesn’t Kill Us uncovers how just about anyone can reclaim our species’ evolutionary strength by reimagining how our bodies fit into the world and then slowly conditioning ourselves to unfamiliar environments.

About the author
Scott Carney is an investigative journalist and anthropologist whose stories blend narrative non-fiction with ethnography. He has been a contributing editor at Wired and his work also appears in Mother Jones, Foreign Policy, Playboy, Details, Discover, Outside and Fast Company. He regularly appears on variety of radio and television stations from NPR to National Geographic TV and has had academic work published in Nature and SAIS Journal. He holds a number of academic appointments including as a Senior Fellow at the Schuster Institute for Investigative Journalism. In 2010 he won the Payne Award for Ethics in Journalism for the story “Meet the Parents” which tracked an international kidnapping-to-adoption ring. His first book, The Red Market: On the Trail of the World’s Organ Brokers, Bone Thieves, Blood Farmers and Child Traffickers, was published by William Morrow in 2011 and won the 2012 Clarion Award for best non-fiction book. His second book A Death on Diamond Mountain: A True Story of Obsession, Madness and the Path to Enlightenment came out with Gotham Books in 2015. He first traveled to India while he was a student at Kenyon College in 1998 and spent six years living there. Along the way, he learned Hindi and twice drove a motorcycle across the country. In 2004 he received a MA in anthropology at the University of Wisconsin-Madison. He currently lives in Denver, CO.

About the Library Author Series
Bud Werner Memorial Library presents an ongoing program of author talks throughout the year. These are free community events held in Library Hall, where a diverse award-winning range of visiting authors speak about their literary works and their writing processes. Each talk is followed by a Q&A and an opportunity to have authors sign copies of  their books.