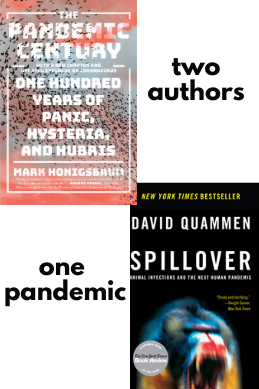 Saturday, June 6, 2020 - 10:00am to 11:00am
Spend a Saturday morning listening in on two esteemed science writers discuss the foremost issue of our time: global pandemic.
Register to attend the Quammen & Honigsbaum Conversation

David Quammen, author of the national bestselling book Spillover, in conversation with Mark Honigsbaum, author of The Pandemic Century, releasing this month in paperback with a coronavirus update --  a book that Nature hails as "gripping," and The Observer calls a "riveting, vivid history of modern disease outbreaks....for if the past 100 years have taught us anything, it is that new diseases and viral strains will inevitably beset us, no matter how sophisticated science becomes."

About The Pandemic Century: One Hundred Years of Panic, Hysteria, and Hubris 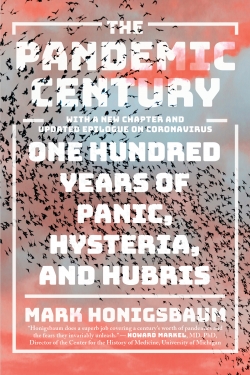 The paperback edition releases next week (and you can pre-order it from Off the Beaten Path!), including a new chapter and updated epilogue on coronavirus!

How can we understand the COVID-19 pandemic? Ever since the 1918 Spanish influenza pandemic, scientists have dreamed of preventing such catastrophic outbreaks of infectious disease. Yet despite a century of medical progress, viral and bacterial disasters continue to take us by surprise, inciting panic and dominating news cycles. In The Pandemic Century, a lively account of scares both infamous and less known, medical historian Mark Honigsbaum combines reportage with the history of science and medical sociology to artfully reconstruct epidemiological mysteries and the ecology of infectious diseases. We meet dedicated disease detectives, obstructive or incompetent public health officials, and brilliant scientists often blinded by their own knowledge of bacteria and viruses―and see how fear of disease often exacerbates racial, religious, and ethnic tensions.

About Spillover: Animal Infections and the Next Human Pandemic 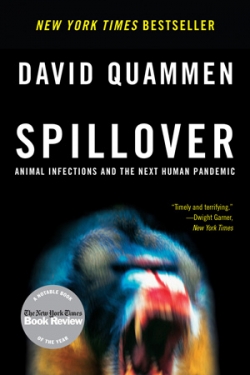 The next big human pandemic—the next disease cataclysm, perhaps on the scale of AIDS or the 1918 influenza—is likely to be caused by a new virus coming to humans from wildlife. Experts call such an event “spillover” and they warn us to brace ourselves. David Quammen has tracked this subject from the jungles of Central Africa, the rooftops of Bangladesh, and the caves of southern China to the laboratories where researchers work in space suits to study lethal viruses. He illuminates the dynamics of Ebola, SARS, bird flu, Lyme disease, and other emerging threats and tells the story of AIDS and its origins as it has never before been told. Spillover reads like a mystery tale, full of mayhem and clues and questions. When the Next Big One arrives, what will it look like? From which innocent host animal will it emerge? Will we be ready?

Find a copy of The Pandemic Century to check out at Bud Werner Memorial Library.

Find a copy of Spillover to check out at Bud Werner Memorial Library.

Buy Spillover and The Pandemic Century from Steamboat Springs' independent bookstore, Off the Beaten Path. 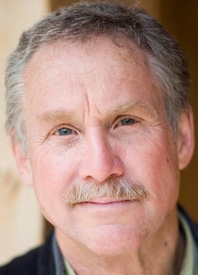 David Quammen is the author of four collections of short nonfiction written during his time as a columnist at Outside Magazine, and four full-length nonfiction books: The Song of the Dodo, Monster of God, The Reluctant Mr. Darwin and Spillover. Spillover was a finalist for seven awards and earned him the Science and Society Book Award, given by the National Association of Science Writers, and the Society of Biology (UK) Book Award in General Biology. Quammen has been honored with the John Burroughs Medal for nature writing, an Academy Award in Literature from the American Academy of Arts and Letters, an award in the art of the essay from PEN, and (three times) the National Magazine Award. Quammen is also a contributing writer for National Geographic. He is a past Literary Sojourn author, and he lives in Bozeman, Montana. 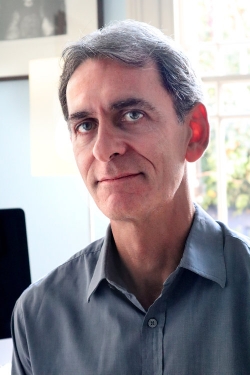 Mark Honigsbaum is a medical historian, journalist, and author of five books including The Pandemic Century: One Hundred Years of Panic, Hysteria, and Hubris and The Fever Trail: In Search of the Cure for Malaria. He specializes in the history and science of infectious disease, and is a regular contributor to The Observer and The Lancet. His history of the 1918 influenza pandemic, Living With Enza,  was nominated for the Royal Society science book of the year. He was formerly and investigative reporter and feature writer at newspapers such as the Evening Standard, The Independent on Sunday, The Observer and The Guardian. He currently podcasts at Going Viral and lectures at City University of London.