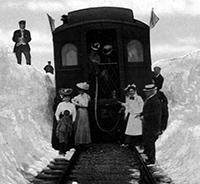 Through a first-person Chautauqua-style monologue, storyteller and performer Dave Naples, as David Moffat, reveals the multimillionaire Moffat’s major contributions to Colorado’s development. Moffat was the builder of one of the most important and challenging railroads in the country, known as the Moffat Road, president of the First National Bank of Denver, and one of the wealthiest and most important businessmen in the West. As owner of many gold and silver mines, the banker and railroad tycoon was responsible for collaborating with a small group to rescue Denver in 1866 when the Union Pacific decided not to pass through Denver with their transcontinental railroad. His legacy would create his own rail line from Denver to Craig and leave the Denver & Rio Grande Western Railroad (which later became the Union Pacific Railroad) with lines that would outlast most other rail lines in Colorado. For his enormous efforts, the Moffat Tunnel and Steamboat's neighboring Moffat County were named after him.

About the storyteller
Dave Naples has been portraying historic characters, including Teddy Roosevelt, David Moffat, Billy Cozens and Ezra Kaufmann, in Chautauqua format for more than 20 years. Originally from North Carolina, he has lived in Colorado for 28 years. Naples is a professional musician, small business owner, piano tuner, director of the Moffat Road Railroad Museum, president of the Grand County Model Railroad Club and musical director of the Irish band Claddagh.