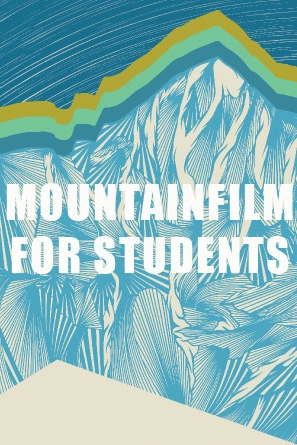 Bud Werner Memorial Library brings Mountainfilm for Students home to Steamboat's kids! That's right, a Mountainfilm On Tour lineup designed for kids 12 and under (although we're pretty sure everyone will love these films).

Kids, films and mountains are a pretty good combination. As important as films and the ideas they generate, however, is the reminder that people on both sides of the camera—adventurer and those who document such deeds—are folks our children may grow up to be. Steamboat Springs is uniquely positioned to provide access to these roles because of its terrain, community and resources. Mountainfilm for Students, therefore, in its mix of elements, is designed to inspire and educate the younger crowd.

Register to watch at the link above. We'll email you a streaming link and password to watch the Mountainfilm for Students lineup at your leisure during our week-long screening window.

A Cycle Effect Story ​​| 5 mins
Director ​Jeff Woods
What does a bike feel like to you? Rita Gutierrez poses this question as she shares lessons learned on and off a bicycle through her participation in The Cycle Effect: an organization with a mission to empower young women through mountain biking to create brighter futures andbuild stronger communities.

Maestro ​​| 2 mins
Directors ​Victor Caire, Lucas Navarro, Gabriel Grapperon, Florian Babikian, Théophile Dufresne
Under the light of the full moon, an incredible orchestra of animals comes alive with the guidance of their conductor — a squirrel. They disappear into the forest as quickly as they crescendoed, leaving us to wonder what’s happening in the woods late at night?

Bear Whisperer​​ | 5 mins
Director​ Robert Gourley
Originally hired by the police department to exterminate bears that had overpopulated Mammoth Lakes, California, Steve Searles instead decided to teach the bears to co-exist with the town’s residents. “Nobody has ever been killed by a black bear,” he explains. “I know each bear individually in Mammoth from the time they’re born until the time they die.”

El Monociclo en Cuba ​​| 7 mins
Director ​Nathan Ward
Kian Ward sees the world with two eyes and one wheel as he explores Cuba on his unicycle. Pedaling through the cobblestone streets, Kian shares what he’s learning and how he’s adventuring as a part of his year of “world-schooling.”

The Magic of Chess​​ | 5 mins
Director​ Jenny Schweitzer Bell
Every year, the next generation of chess masters meet at the National Elementary Chess Championship. In the ensuing games, kids learn not only the elements of the game but speak of bravery, belief in oneself and the importance of opening moves. They may not always win, but in this short film, the magic of the game is seen through youthful eyes brimming with possibility.

Incorporate Mountainfilm into Your Classroom

Teachers! Want to share the festival and go deeper with these films in your classroom? Materials tailored for Bear Whisperer and The Magic of Chess are available for free for educators. The lessons are compliant with College and Career Readiness Anchor Standards. You may use them at your discretion as a complete lesson, a discussion guide or to discover additional resources. Email Youth Services Librarian Jamie Collins at jcollins@steamboatlibrary.org to request classroom resources.

Founded in 1979, Mountainfilm is one of America’s longest-running film festivals. The annual festival is held every Memorial Day weekend in Telluride. Mountainfilm is a dynamic organization and festival of films, people, art, stories, and ideas that celebrate indomitable spirit, educates and inspires audiences, and motivates individuals and communities to advance solutions for a livable world. Mountainfilm on Tour in Steamboat Springs will feature a collection of culturally rich, adventure-packed and enlightening documentary short films that align with Mountainfilm’s mission to use the power of film, art and ideas to inspire audiences to create a better world.