Cheap Land Colorado is a passage through an America lived wild and off the grid, where along with independence and stunning views come fierce winds, neighbors with criminal pasts, and minimal government and medical services.

Get a copy of Cheap Land Colorado

The Library now has ample copies of Cheap Land Colorado circulating locally in our collection (including digital, audio and print copies). Books are available so everyone is able to check out a copy, read it and participate in the community conversations.

Buy a copy of Cheap Land Colorado from Steamboat Springs' independent bookstore, Off the Beaten Path. 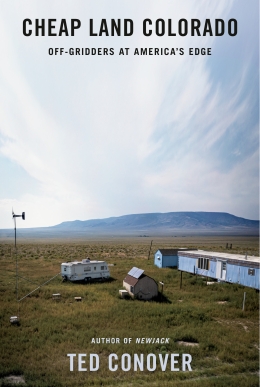 In May 2017, Ted Conover went to Colorado to explore firsthand a rural way of life that is about living cheaply, on your own land—and keeping clear of the mainstream. The failed subdivisions of the enormous San Luis Valley make this possible. Five-acre lots on the high prairie can be had for five thousand dollars, sometimes less.

Conover volunteered for a local group trying to prevent homelessness during the bitter winters. He encountered an unexpected diversity: veterans with PTSD, families homeschooling, addicts young and old, gay people, people of color, lovers of guns and marijuana, people with social anxiety—most of them spurning charity and aiming, and sometimes failing, to be self-sufficient. And more than a few predicting they’ll be the last ones standing when society collapses.

Conover bought his own five acres and immersed himself for parts of four years in the often contentious culture of the far margins. He found many who dislike the government but depend on its subsidies; who love their space but nevertheless find themselves in each other’s business; who are generous but wary of thieves; who endure squalor but appreciate beauty. In their struggles to survive and get along, they tell us about an America riven by difference where the edges speak more and more loudly to the mainstream.

“Engrossing . . . Nothing motivates the journalist Ted Conover like a no-trespassing sign. . . . One of Conover’s strengths as a writer is that he is willing to let his subjects ‘say their piece.’ He is wonderfully open to people’s understanding of themselves, even when he sees the world very differently. . . . With his thorough and compassionate reportage, Conover conjures a vivid, mysterious subculture populated by men and women with riveting stories to tell. To read Cheap Land Colorado is to take a drive through a disquieting, beguiling landscape with an openhearted guide, windows down, snacks in the cooler, no GPS. It’s a ride I didn’t want to end.” –  The Washington Post

About the author: Ted Conover 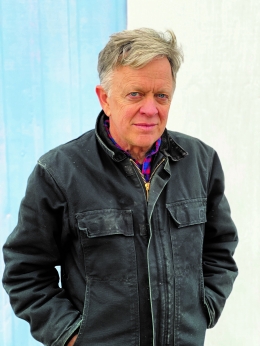 “One of our great narrative journalists . . . Conover’s approach isn’t so much about pinning people down as letting them reveal themselves. He’s such a wry and nimble writer that much of the time this works, yielding rounded portraits that are full of ambiguity, anguish and contradiction.” – The New York Times

Conover’s career in immersive journalism has taken him from a nuanced exploration of local culture for his 1991 title Whiteout: Lost in Aspen to a year-long stint as a prison guard resulting in Newjack: Guarding Sing Sing, which won the National Book Critics Circle Award for nonfiction and was a finalist for the Pulitzer Prize. For his latest critically-acclaimed book released last fall, Cheap Land Colorado: Off-Gridders at America’s Edge, Conover returned to his home state, living off and on for four years in the San Luis Valley in an effort to better understand the divisions that have increasingly riven the American social and political consciousness. His writing has appeared in The New York Times Magazine, The Atlantic, The New Yorker, Harper’s Magazine, and National Geographic. He is a professor at, and the former director of, New York University’s Arthur L. Carter Journalism Institute.

Ted Conover, in his own words:

"My first book (Rolling Nowhere), began as research for a senior anthropology thesis. A transcendent moment occurred in a freight yard in Bakersfield, California, where, as I spoke with a guy my age named Enrique Jarra, it dawned on me that Mexican migrants were the true, modern-day incarnation of the classic American hobo. Coyotes, my second book, recounts a year of work and travel with these migrants.

A smart guy I met in New York introduced me at a party as a writer who “made a living sleeping on the ground,” which got me worried and led me to Aspen and Whiteout, a very different sort of first-person ethnography. Then I moved to New York and wrote Newjack: Guarding Sing Sing, an account of immersion in a world that is tough and dangerous and–if a person’s not careful–soul-shrinking. That research was my hardest ever, but also paid an enduring dividend.

In The Routes of Man, I link a series of challenging first-person passages down roads with reflections on how this most extensive man-made artifact changes us all, both intentionally and not. It’s a book about roads but I’m in it as well. Immersion: A Writer’s Guide to Going Deep is an attempt to share what I’ve learned about this sort of writing. My most recent book, Cheap Land Colorado: Off-Gridders at America’s Edge, recounts a passage into a landscape and community that in truth I haven’t left yet. It may be the closest I’ve come in any of my books to “going native.”

I admire writing where writers have something at stake; where they don’t just depend on experts but rather take time to think and research and participate, thereby transforming themselves into experts; where caring and the urgency of the subject transform the writing into something that matters."