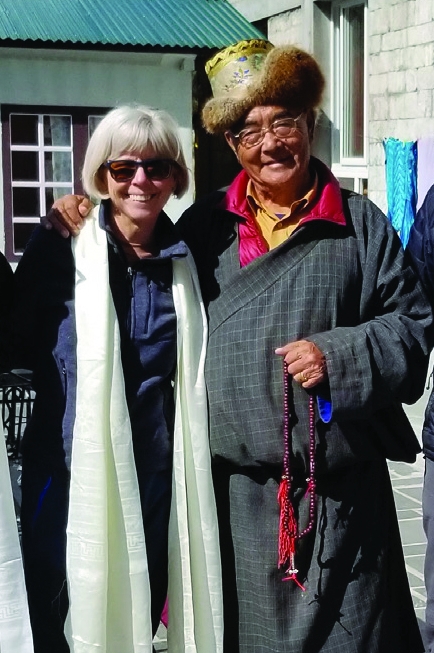 Thursday, December 9, 2021 - 6:00pm to 7:00pm
Join author Pattie Moon for the launch of Tough & Cheerful: The Life and Times of Kanchha Sherpa, Last Living Member from the First Ascent of Mount Everest 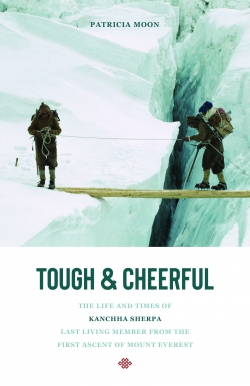 Tough and Cheerful is a story about the world’s tallest mountain, the evolution of Nepal, and a man who has been part of the staggering transformation of both. As the last living member of the 1953 first summit of Mount Everest, with Edmund Hillary and Tenzing Norgay, Kanchha’s history is one never to be forgotten.

In 1933, Kanchha Sherpa was born in Namche, a small village in the secluded Khumbu region of Nepal, home to the world’s highest mountains. He and his family struggled to find food to eat, went barefoot in the winter, and had no idea that there was another, very different world beyond the Himalayas. But much of the world knew about them and their sacred mountain, Chomolungma. It was, after all, Mount Everest, and people from all over the world would clamor endlessly for its summit in the many decades to come.

Kanchha’s personal story takes us through time and mountain ranges, from scarcity to abundance, from challenge to conquest, from personal collapse to moral rectitude, and from a hidden land of breathtaking beauty to one threatened by the world’s changing climate.

As a man who now lives in the 21st century, it feels as though Kanchha has had a front row seat to a thousand years of history in a single lifetime. Humble, thoughtful, brave and funny, this “tough and cheerful” man has a lot to teach us all.

A member of Kanchha’s extended family asked Patricia Moon to write this book. The request was made casually while ascending a particularly steep stretch of trail in the Langtang region of the Himalaya in fall 2018. Since breathing was at a premium, a simple “yes” felt like the correct response. She was in fact delighted.

During spring 2019, Pattie spent three days living with Kanchha, his son Tsering Penjo and his daughter-in-law Kami Doma at their home in Namche. Their lovely Nirvana Home hotel became Pemba’s and Pattie’s home for the duration. Sharing good food, laughter and walks was the perfect background to developing the story. During those few days, Pattie discovered that the trajectory of Kanchha’s life mirrors the history of Nepal. It became her great honor and joy to relay the stories of both a man and his nation as they intertwined over more than eight decades.

Pattie has been a frequent traveler to the Khumbu, the region of Nepal made famous by Mount Everest. She visits on behalf of a Colorado-based non-profit, the Sherpa Education Project, and enjoys the opportunity to hike from village to village while visiting with families served by the organization. This includes a monastic family at the Oyen Changmityang Monastery. When not traveling, Pattie lives in Steamboat Springs, Colorado, a small, high-country community that shares her enthusiasm for mountains, adventures and a good story.

Pre-order Tough & Cheerful from Steamboat Springs' independent bookstore, Off the Beaten Path. All proceeds from the sale of this book go directly to the Sherpa Education Project.

About the Local Author Spotlight at the Library

Bud Werner Library presents an occasional opportunity to engage with select Yampa Valley authors and their books. Each talk is followed by a Q&A, and books are available for sale and signing courtesy of Off the Beaten Path Bookstore.