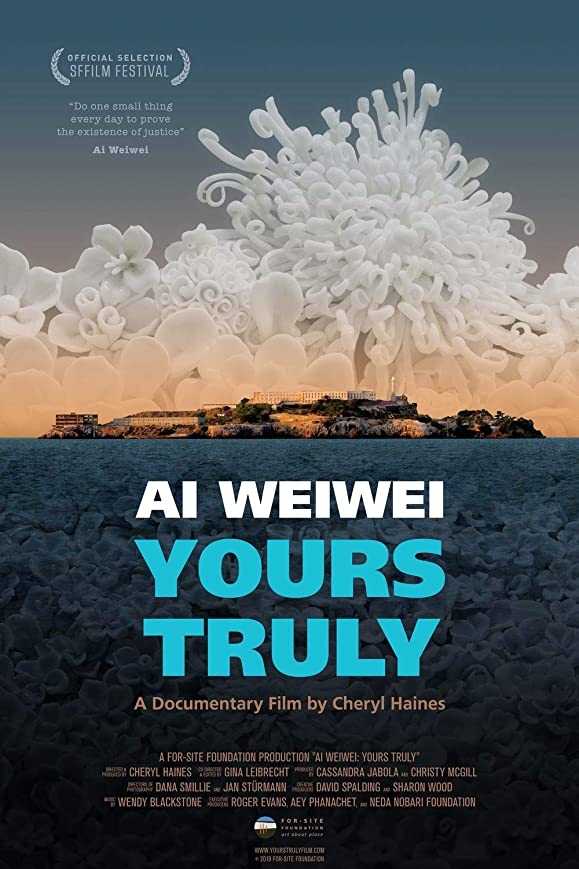 A special exclusive screening for Bud patrons, available from 5 pm on 7/15 until 11:30 pm on 7/17! Streaming from the link above. Steamboat library users must enter the password ALCATRAZ to start watching.

Ai Weiwei: Yours Truly begins with the remarkable exhibition @Large: Ai Weiwei on Alcatraz, organized in 2014 by director Cheryl Haines. Following Ai Weiwei’s detention at the hands of the Chinese authorities, the outspoken artist and activist transformed the former island penitentiary of Alcatraz into an artistic platform. The resulting exhibition engaged over 900,000 visitors in a conversation about the plight of prisoners of conscience around the world.

Trace was one of the eight new artworks that comprised the @Large exhibition. Made entirely from LEGO bricks, the work depicts the faces and names of 176 brave individuals who were incarcerated or exiled due to their beliefs, affiliations, and nonviolent expressions of dissent. The work’s companion piece, Yours Truly, invited visitors to compose messages of hope to many of the prisoners seen in Trace.

Visitors were galvanized by the possibility that their voices might have an impact. By the time the exhibition ended, over 90,000 postcards had been sent. Then something even more astonishing began to happen. They started to hear back from the prisoners and their families. Some of the messages from Alcatraz were getting through, and people had been moved—even sustained—by the public’s outpouring of concern for their welfare and causes.

The film Ai Weiwei: Yours Truly follows these postcards around the globe—from Alcatraz Island to Beijing, Washington, D.C., and Cairo—as director Cheryl Haines meets with former prisoners of conscience and their families to discuss their impossible choices and the comfort they found in messages sent by people they would never meet. The film also takes a deep dive into Ai Weiwei’s inspiration for the postcard project. Interviews with the artist, his mother, and lifelong friends uncover the touching story of a childhood spent in exile and a postcard that found its way to the middle of nowhere. Ultimately, Ai Weiwei: Yours Truly is a call to action, extending the incredible reach of Ai Weiwei’s postcards by asking viewers to take the issue of global human rights personally.

1 hour 16 min.
“The misconception of totalitarianism is that freedom can be imprisoned. This is not the case. When you constrain freedom, freedom will take flight and land on a windowsill.”
Ai Weiwei

About Artists on Film

An ongoing documentary film series at the Bud Werner Memorial Library that focuses on the life and work of creatives. See films that put the lens on all genres of artists,  from painters, photographers and sculptors to fashion designers, musicians, architects, movie makers, dancers, choreographers, authors and more. Learn about the legacies, lives and enduring work of individuals who have worked (or are still working) in a broad range of creative endeavors.

During this time while we're staying safer at home, Bud Werner Memorial Library is organizing special opportunities to share some of the newest documentaries you might have seen in Library Hall. Instead, we're watching them online this spring, virtually together at home. The library hopes that you'll enjoy watching these thoughtful films, then come together for community conversations to share the experience and maybe even put our isolated heads together for some thought-provoking brainstorming and solutions.