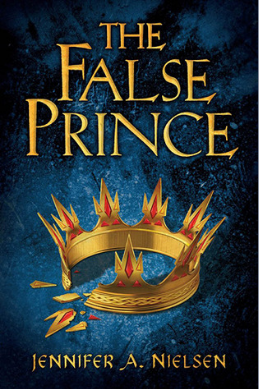 Wednesday, December 8, 2021 - 5:30pm to 6:30pm
Read the book and meet at the library for a lively book discussion!
Register for this club

Read the book, The False Prince by Jennifer A. Nielsen and meet at the library on Wednesday, December 8 at 5:30pm for a lively book discussion. For both boys and girls, ages 10 to 12 years old, parents encouraged to attend. Masks required. Pick up your copy of the book to borrow and sign up at the Kids' Desk or online.

New York Times bestseller The False Prince thrills with wild twists and turns, danger and deceit, and the revelation of hidden identities that will have readers rushing breathlessly to the end.

In a discontented kingdom, civil war is brewing. To unify the divided people, Conner, a nobleman of the court, devises a cunning plan to find an impersonator of the king's long-lost son and install him as a puppet prince. Four orphans are recruited to compete for the role, including a defiant boy named Sage. Sage knows that Conner's motives are more than questionable, yet his life balances on a sword's point -- he must be chosen to play the prince or he will certainly be killed. But Sage's rivals have their own agendas as well. As Sage moves from a rundown orphanage to Conner's sumptuous palace, layer upon layer of treachery and deceit unfold, until finally, a truth is revealed that, in the end, may very well prove more dangerous than all of the lies taken together. The first of a wildly popular fantasy series!

Read the book and meet at the library for a riveting book discussion and fun filled activities!