Thursday, August 29, 2019 - 6:00pm to 7:15pm
The naturalist, artist and writer shares her brand-new book about life, love and dealing with great loss...and finding grace and redemption in a wild bird.

A special author visit for the 2019 Yampa Valley Crane Festival! 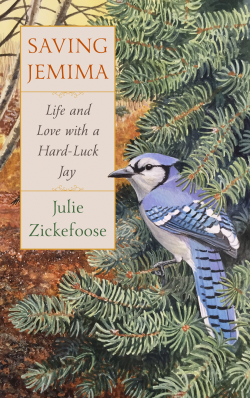 Julie Zickefoose thinks of herself as an unsung, minor, rather dirty superhero. Her superpower: saving small, economically worthless wildlife that would otherwise die. An orphaned jay named Jemima was one such foundling. Spending nearly a year healing, studying and raising the young blue jay for release opened the door to their world for Julie. She began writing and illustrating Saving Jemima: Life and Love with a Hard-luck Jay immediately upon becoming her foster mother. More than a wildlife rehab story, it’s the story of life, love and dealing with great loss; of finding grace and redemption in bonding with a wild bird. This will be the first time she presents all-ages talk, to go with her forthcoming book, and it is expected to be hugely engaging and entertaining, whether or not you have an interest in blue jays.

Julie Zickefoose started off as an illustrator of natural history subjects as a college freshman in 1976. A six-year stint as a field biologist with The Nature Conservancy’s Connecticut Chapter proved a strong motivator both to learn more about ecosystems and to go back to drawing. Along the way, she began to write her own essays, studded with observations of birds and animals, and writing slowly crept into the forefront of her interests. She has been a Contributing Editor to Bird Watcher’s Digest since 1986 and has painted 27 covers for the magazine. From 2005-2010 Julie had a five-year run contributing commentaries to National Public Radio’s All Things Considered, telling stories of bird-eating bullfrogs and orphaned hummingbirds. She has authored five books: Natural Gardening for Birds, Letters from Eden, The Bluebird Effect, and Baby Birds: An Artist Looks Into the Nest and most recently, Saving Jemima: Life and Love With a Hard-Luck Jay, the intimate story of how an orphaned bird can save a soul. Julie lives and works quietly on an 80-acre wildlife sanctuary in the back country of Whipple, Ohio.