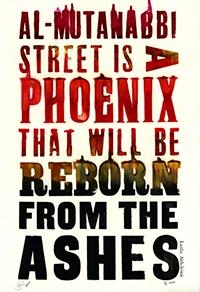 Al-Mutanabbi Street Starts Here commemorates the 2007 bombing of Baghdad’s historic street of booksellers. After reading about the devastation of Iraq’s literary and intellectual center, San Francisco poet and bookseller Beau Beausoleil created the Al-Mutanabbi Street Coalition. Every year since its creation, poetry readings and exhibits have taken place around the world on or around March 5.

“We are a project of Witness and Memory, of solidarity with the civilian population of Iraq and their artists and writers. We want the Iraqi people to know that we see them, that we hear them, and that we will not let anyone forget Iraq and the Iraqi people who have endured so much.” – Beau Beausoleil

What is Al-Mutanabbi Street?
Located in Baghdad, Al-Mutanabbi Street is a winding street about of one thousand feet long, noted for its many bookstores and outdoor bookstalls where people gather as a great humanitarian center. Named after the famous classical Arab poet Abu at-Tayyib al-Mutanabbi (915–965 CE), it has been a thriving center of Baghdad’s bookselling and publishing for centuries. The 2007 bombing took the lives of 30 people and destroyed a large portion of the neighborhood. The booksellers who survived rebuilt their stores and are once again in business. They sell works by Sunnis, Shiites, Christians, Jews, children's books and progressive publications from around the world.

As Steamboat Springs gathers in our public library, we join citizens around the world to celebrate a free exchange of ideas and knowledge, standing with the Iraqi people who have endured so much, and others at home and abroad who are unable to make their voices heard. Al-Mutanabbi Street Starts Here has grown to become an important organization that stands for freedom of speech and expression. On this 11th anniversary of the bombing of the ancient city's literary center, readings will take place in locations such as Paris, Dubai, Berlin, Baghdad, Washington, D.C., London and Steamboat Springs.

“… we are sister and brother in all of this. Tell them that wherever someone sits down and begins to write towards the truth, or picks up a book to read, it is there that al-Mutanabbi Street Starts.”