Each year the Bud Werner Memorial Library presents a community read in Steamboat Springs. We call it ONE BOOK STEAMBOAT. As the UN’s COP-26 Climate Change Conference in Glasgow comes to a close and climate change is top of mind, the Steamboat Springs community is invited to read and discuss the critically acclaimed novel The Ministry for the Future by award-winning author Kim Stanley Robinson.

The Ministry for the Future is a story of communities, climate and change. It is a masterpiece of the imagination, using fictional eyewitness accounts to tell the story of how climate change will affect us all. Its setting is not a desolate, postapocalyptic world, but a future that is almost upon us. This extraordinary novel from visionary science fiction writer Kim Stanley Robinson will change the way you think about the climate crisis.

What exactly is "cli-fi"?

It is a pop culture abbreviation for climate fiction, using a nod to science fiction's common reference as "sci-fi." Cli-fi is a form of speculative fiction that deals with the impacts of climate change and global warming, typically featuring a changed or changing climate as a major plot device.

Get a copy of The Ministry for the Future

The Library now has ample copies of The Ministry for the Future in our collection (including digital, audio and print copies). Books are available so everyone is able to check out a copy, read it and participate in the community conversations.

Borrow The Ministry for the Future from Bud Werner Memorial Library.

Buy a copy of The Ministry for the Future from Steamboat Springs' independent bookstore, Off the Beaten Path. 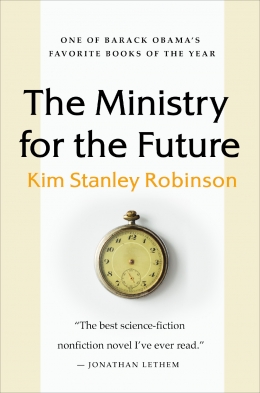 A story set in the near future. This is how it begins...

Article 14 of the Paris Agreement Under the United Nations Framework Convention on Climate Change called for a periodic taking stock of all the signatory nations’ carbon emissions, which meant reporting on the total global carbon burn for the year in question. The first “global stocktake” was scheduled for 2023, and then every five years after that.

That first global stocktake didn’t go well. Very few nations had hit the targets they had set for themselves, even though they had set soft targets. Aware of the shortfall even before the 2023 stocktake, 108 countries had promised to strengthen their pledges; but these were smaller countries, amounting together to about 15 percent of global total emissions.

At the annual Conference of the Parties the following year, emissions had yet to improve prompting some delegates to argue that a new subsidiary body, with permanent duties, and the resources to pursue them, was needed to help move the needle on climate change. So at COP29, held in Bogotá, Colombia, the Parties to the Agreement created a new Subsidiary Body for Implementation of the Agreement, to work with the Intergovernmental Panel on Climate Change, all the agencies of the United Nations, and all of the governments signatory to the Paris Agreement, to advocate for the world’s future generations of citizens.

This new Subsidiary Body was furthermore charged with defending all living creatures present and future who cannot speak for themselves, by promoting their legal standing and physical protection.

Someone in the press named this new agency “the Ministry for the Future,” and the name stuck and spread. It was established in Zurich, Switzerland, in January of 2025.

Not long after that, the big heat wave struck India...and so the work of the Ministry for the Future unfolds.

"If I could get policymakers, and citizens, everywhere to read just one book this year, it would be Kim Stanley Robinson’s The Ministry for the Future." —Ezra Klein (Vox)

"[A] gutsy, humane view of a near-future Earth...Robinson masterfully integrates the practical details of environmental crises and geoengineering projects into a sweeping, optimistic portrait of humanity's ability to cooperate in the face of disaster. This heartfelt work of hard science-fiction is a must-read for anyone worried about the future of the planet."—Publishers Weekly (starred)

About the author: Kim Stanley Robinson 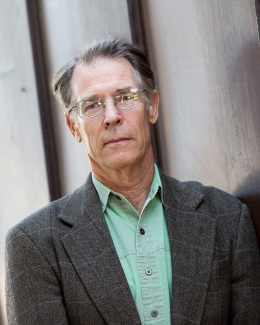 A speaker at the UN’s COP-26 Climate Change Conference in Glasgow (November 1-12, 2021), Kim Stanley Robinson is a New York Times bestselling author and winner of the Hugo, Nebula and Locus awards. A science fiction writer known for literary pieces, he is the author of more than 20 books, including the bestselling Mars trilogy and the critically acclaimed Forty Signs of Rain, The Years of Rice and Salt and 2312, which was a New York Times bestseller nominated for all seven of the major science fiction awards—a first for any book.

Among his notable works is an essay recently published in The Financial Times, A climate plan for a world in flames. In 2008, Robinson was named a “Hero of the Environment” by Time magazine, and he works with the Sierra Nevada Research Institute. In 2016 he was given the Heinlein Award for lifetime achievement in science fiction, and asteroid 72432 was named “Kimrobinson.” In 2017 he was given the Arthur C. Clarke Award for Imagination in Service to Society. Despite his work in the genre of fiction, The New Yorker has called Robinson “one of the most important political writers working in America today.”

The Library is hosting a series of films, talks and moderated book discussions designed to enhance your reading of The Ministry for the Future. The grand finale for our community read will be a March 1 talk with award-winning author Kim Stanley Robinson.