Each year the Bud Werner Memorial Library presents a community read in Steamboat Springs. We call it ONE BOOK STEAMBOAT. For 2020, the community is invited to read the work of National Book Award-winning author, historian and Boston University Center for Antiracism Research founding director Ibram X. Kendi. Designed for entire families to engage in challenging racism, the Library has selected three of his books about antiracism that address every age:

The Library has ample copies of all these books in our collection (digital, audio and hard copies) that are available so everyone is able to check out a copy of the book, read it, and participate in the community conversation.

One Book Steamboat is being offered in collaboration with Indivisible,  a six-week Steamboat Pilot & Today reporting project that focuses on the issues of diversity, equity and inclusivity by exploring the divides that exist in Steamboat Springs and Routt County. The series also looks at the efforts underway locally to bridge those gaps.

Like fighting an addiction, being an antiracist requires persistent self-awareness, constant self-criticism, and regular self-examination.
― Ibram X. Kendi, How to Be an Antiracist

One Book Steamboat 2020: How to Be an Antiracist 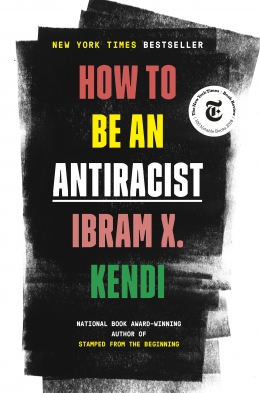 Antiracism is a transformative concept that reorients and reenergizes the conversation about racism—and, even more fundamentally, points us toward liberating new ways of thinking about ourselves and each other. At its core, racism is a powerful system that creates false hierarchies of human value; its warped logic extends beyond race, from the way we regard people of different ethnicities or skin colors to the way we treat people of different sexes, gender identities, and body types. Racism intersects with class and culture and geography and even changes the way we see and value ourselves. In How to Be an Antiracist, Ibram X. Kendi takes readers through a widening circle of antiracist ideas—from the most basic concepts to visionary possibilities—that will help readers see all forms of racism clearly, understand their poisonous consequences, and work to oppose them in our systems and in ourselves. Kendi weaves an electrifying combination of ethics, history, law, and science with his own personal story of awakening to antiracism. This New York Times No. 1 bestseller is an essential work for anyone who wants to go beyond the awareness of racism to the next step: contributing to the formation of a just and equitable society.

Praise for How to Be an Antiracist

"The most courageous book to date on the problem of race in the Western mind." —The New York Times

"How to Be an Antiracist couldn’t come at a better time. . . . Kendi has gifted us with a book that is not only an essential instruction manual but also a memoir of the author’s own path from anti-black racism to anti-white racism and, finally, to antiracism. . . .  How to Be an Antiracist gives us a clear and compelling way to approach, as Kendi puts it in his introduction, ‘the basic struggle we’re all in, the struggle to be fully human and to see that others are fully human.’”—NPR

OBS for Young Adults & Families ~ Stamped: Racism, Antiracism, and You 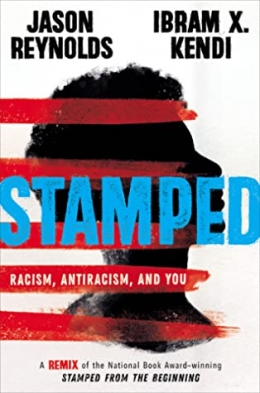 Jason Reynolds has co-written a remix of Ibram X. Kendi's National Book Award-winning Stamped from the Beginning. Together, the authors offer a timely, crucial, and empowering exploration of racism–and antiracism–in America.

This is NOT a history book.
This is a book about the here and now.
A book to help us better understand why we are where we are.
A book about race.

The construct of race has always been used to gain and keep power, to create dynamics that separate and silence. Stamped  reveals the history of racist ideas in America, and inspires hope for an antiracist future. It takes you on a race journey from then to now, shows you why we feel how we feel, and why the poison of racism lingers. It also proves that while racist ideas have always been easy to fabricate and distribute, they can also be discredited. Through a gripping, fast-paced, and energizing narrative written by beloved award-winner Jason Reynolds, this book shines a light on the many insidious forms of racist ideas–and on ways readers can identify and stamp out racist thoughts in their daily lives.

"Reynolds’s engaging, clear prose shines a light on difficult and confusing subjects, including anti-blackness and the creation of racial capitalism. Terms like “segregationist,” “integrationist” and “anti-racist” are defined in direct, accessible language, becoming real tools for a reader to take from the book. This is no easy feat. These ideas are the water that we all swim in." —New York Times 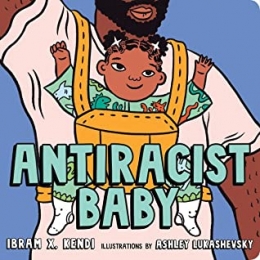 Take your first steps with Antiracist Baby. Or rather, follow Antiracist Baby‘s nine easy steps for building a more equitable world. Ibram X. Kendi has created a  9×9" picture book that empowers parents and children to uproot racism in our society and in ourselves, including discussion prompts to help readers recognize and reflect on bias in their daily lives. With bold art and thoughtful yet playful text, Antiracist Baby introduces the youngest readers and the grown-ups in their lives to the concept and power of antiracism. Providing the language necessary to begin critical conversations at the earliest age, Antiracist Baby is perfect for readers of all ages dedicated to forming a just society.

"This excellent board book answers questions so many people are asking right now: What can I do? How can I help? Kendi’s choice to speak directly to new parents in this format works quite well. His succinct, impactful prose makes for an accessible guide to anti-racism for everyone. Lukashevsky’s artwork elevates the text even more with brilliant color and charming details that will inspire readers to linger on each page." —School Library Journal

About the Author: Ibram X. Kendi 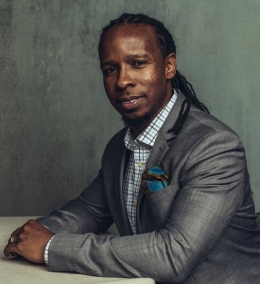 Ibram X. Kendi  is one of America’s foremost historians and leading antiracist voices. He is a National Book Award-winning and #1 New York Times bestselling author, and he is the Andrew W. Mellon Professor in the Humanities and the Founding Director of the Boston University Center for Antiracist Research. Kendi is a contributor at The Atlantic and a CBS News correspondent. He will become the 2020-2021 Frances B. Cashin Fellow at the Radcliffe Institute for the Advanced Study at Harvard University.

In addition to his latest bestseller, How to Be an Antiracist, Kendi is the author of The Black Campus Movement, which won the W.E.B. Du Bois Book Prize, and Stamped from the Beginning: The Definitive History of Racist Ideas in America, which won the National Book Award for Nonfiction in 2016. At 34 years old, Kendi was the youngest-ever winner of the NBA for Nonfiction. He grew up dreaming about playing in the NBA (National Basketball Association), and ironically he ended up joining the other NBA.

Kendi has published fourteen academic essays in books and academic journals, including The Journal of African American History, Journal of Social History, Journal of Black Studies, Journal of African American Studies, and The Sixties: A Journal of History, Politics and Culture. He has published op-eds in numerous periodicals, including The New York Times, The Guardian, Washington Post, London Review, Time, Salon, Diverse: Issues in Higher Education, Paris Review, Black Perspectives, and The Chronicle of Higher Education. He has commented on a series of international, national, and local media outlets, such as CNN, MSNBC, NPR, Al Jazeerah, PBS, BBC, Democracy Now, OWN, and Sirius XM. A sought-after public speaker, Kendi has delivered hundreds of addresses over the years at colleges and universities, bookstores, festivals, conferences, libraries, churches, and other institutions in the United States and abroad.

Kendi strives to be a hardcore antiracist and softcore vegan. He enjoys joking it up with friends and family, partaking in African American culture, weight-lifting, reading provocative books, discussing the issues of the day with open-minded people, and hoping and pressing for the day the New York Knicks will win an NBA championship and for the day this nation and world will be ruled by the best of humanity.

About the Author: Jason Reynolds 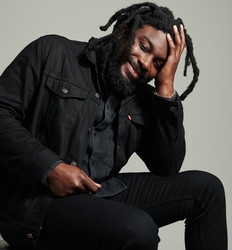 Jason Reynolds is the New York Times best-selling author of All American Boys, the Track series, Long Way Down, For Everyone, and Miles Morales-Spiderman. He writes novels and poetry for young adult and middle-grade audiences, including Ghost, a National Book Award Finalist for Young People's Literature. Reynolds is also the 2020–2021 National Ambassador for Young People’s Literature.

Born in Washington, DC and raised in neighboring Oxon Hill, Maryland, Reynolds found inspiration in rap to begin writing poetry at nine years old. He focused on poetry for approximately the next two decades, only reading a novel cover to cover for the first time at age 17 and publishing several poetry collections before he published his own first novel, When I Was The Greatest, in 2014. He won the Coretta Scott King/John Steptoe Award for New Talent for this first work of prose and seven more novels followed in the next four years, including Ghost and two more books in what became his New York Times best-selling Track series, Patina and Sunny; As Brave As You, winner of the 2016 Kirkus Prize, the 2017 NAACP Image Award for Outstanding Literary Work for Youth/Teen, and the 2017 Schneider Family Book Award; and a Marvel Comics novel called Miles Morales: Spider-Man.

Reynolds returned to poetry with Long Way Down, a novel in verse which was named a Newbery Honor book, a Printz Honor Book, and best young adult work by the Mystery Writers of America's Edgar Awards. He lives in Washington, DC. You can find his ramblings at JasonWritesBooks.com.

13th
Ashes to Ashes: A film about two artists addressing racial injustice in America
I Am Not Your Negro
Tell Them We Are Rising: The Story of Black Colleges and Universities
The Black Panthers: Vanguard of the Revolution
The Heroes of the Suffrage Movement | Finish the Fight
The Talk
Through a Lens Darkly
Toni Morrison: The Pieces I Am
White Like Me

Code Switch — Race in your face
Good Ancestor Podcast
Nice White Parents
On Being with Krista Tippett: Resmaa Menakem ‘Notice the Rage; Notice the Silence’
On Being with Krista Tippett: Robin DiAngelo and Resmaa Menakem in Conversation
The 1619 Project — NYT podcast observing the 400th anniversary of the beginning of American slavery
This American Life: Past Imperfect — Azie Dungey recounts playing a slave for tourists at Mount Vernon
Uncivil — The untold stories of the Civil War
Unlocking Us: Brené Brown with Austin Channing Brown on 'I’m Still Here: Black Dignity in a World Made for Whiteness'
Unlocking Us: Brené Brown with Ibram X. Kendi on How to Be an Antiracist
Unlocking Us: Brené Brown with Tarana Burke on Being Heard and Seen
White Lies — True crime

Allegories on Race and Racism, a TEDx talk by social epidemiologist Dr. Camara Jones
Dr. Ibram X. Kendi & Dr. Mona Hanna-Attisha: Why antiracism and fighting for the most vulnerable is more urgent than ever
Dr. Ibram X. Kendi & Rev. Dr. William J. Barber II: The Systems of Our Shared Life Must Change
Equal Justice Initiative explainer: How slavery did not end in 1865, it evolved.
How Can We Win
How to Be an Antiracist — Ibram Kendi at the 2019 Aspen Ideas Festival
How White Fragility Reinforces Racism
Jason Reynolds & Ibram Kendi in Conversation about Stamped
Parenting in Support of Black Lives: How to Build a Just Future for Kids—Dr. Ibram X. Kendi in conversation with child psychologist Dr. Allison Briscoe-Smith
Robin DiAngelo discusses White Fragility: Why It's So Hard for White People to Talk About Racism
The Difference Between Being “Non Racist” and Antiracist — Ibram X. Kendi, TED2020
The Next Question: Conversation on the Real Topics of Race and Justice
Uncomfortable Conversations with a Black Man
What is Systemic Racism? 8-part series showing how racism shows up in institutions & society
Where Do We Go From Here? (Part 1) with Oprah Winfrey
Where Do We Go From Here? (Part 2) with Oprah Winfrey
Who, Me? Biased?: A series of short implicit bias explainers by POV and the New York Times