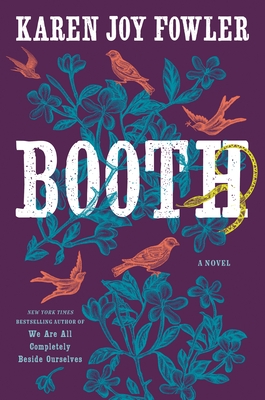 Wednesday, June 8, 2022 - 12:00pm to 1:00pm
Fate, history, and chance collide in Karen Joy Fowler’s riveting historical novel. . . . reckoning of a past that seems too much a prologue to our American present.
Register for this club

John Wilkes Booth needs no introduction, but this isn't really his story. Instead, it is his family, most especially his siblings, who takes center stage. There is "poor" Rosalie, steady and ignored; Junius, a lesser talent than the father for whom he was named; Edwin, introspective and damaged yet brilliant when performing; Asia, beautiful and self-absorbed. All are shaped by the downstream effect of an alcoholic, mercurial, often-absent father and a mother overburdened to the point of collapse. Scandal, loss, and straightened finances plague the family, but worse is yet to come. Interspersed with the lives of the Booths are cherry-picked Lincoln quotations along with a didactic political history meant to relate events to current politics. All builds towards "Johnny's" terrible act and its consequences for his siblings, the unjust suffering of guilt by association. In her first historical novel in a decade, the best-selling Fowler (Black Glass, 2015) presents an omniscient, bird's-eye view of these lives, along with a nod to what could be apocryphal. The result is an engrossing portrayal of a nineteenth-century family living through the U.S.' most turbulent era.or every kind of love—family, romantic, and of the self.