Thursday, April 1, 2021 - 7:00pm to 8:00pm
Spend an evening with acclaimed bestselling author Russell Banks as he shares Foregone, his searing new novel about memory, abandonment and betrayal.
Sign up to attend Russell Banks' talk on Crowdcast 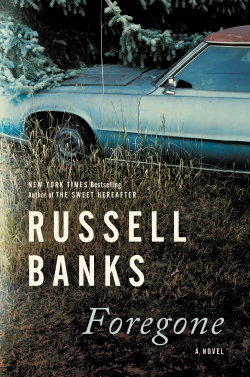 At the center of Foregone is famed Canadian American leftist documentary filmmaker Leonard Fife, one of sixty thousand draft evaders and deserters who fled to Canada to avoid serving in Vietnam. Fife, now in his late seventies, is dying of cancer in Montreal and has agreed to a final interview in which he is determined to bare all his secrets at last, to demythologize his mythologized life. The interview is filmed by his acolyte and ex–star student, Malcolm MacLeod, in the presence of Fife’s wife and alongside Malcolm’s producer, cinematographer, and sound technician, all of whom have long admired Fife but who must now absorb the meaning of his astonishing, dark confession.

Imaginatively structured around Fife’s secret memories and alternating between the experiences of the characters who are filming his confession, the novel challenges our assumptions and understanding about a significant lost chapter in American history and the nature of memory itself. Russell Banks gives us a daring and resonant work about the scope of one man’s mysterious life, revealed through the fragments of his recovered past.

Russell Banks is the internationally acclaimed author of 21 fiction and non-fiction books, including the novels Continental Drift, Rule of the Bone, The Book of Jamaica, Cloudsplitter, Lost Memory of Skin, and most recently, A Permanent Member of the Family, short stories, and Voyager: Travel Writings. His work has been translated into more than 20 languages. Two of his novels, Affliction and The Sweet Hereafter, were made into award-winning feature films. His essays and reviews have been published in major magazines, and he has written screenplays and poetry.

Banks has won numerous honors for his work, including Guggenheim and National Endowment for the Arts Creative Writing Fellowships; O’Henry and Best American Short Story Awards; the John Dos Passos Award; the inaugural Thornton Wilder Prize, the American Book Award; the Literature Award from the American Academy of Arts and Letters; the Anisfield-Wolf Prize, and the 2011 Common Wealth Award for Literature. He has been a PEN/Faulkner Finalist (Affliction, Cloudsplitter, and Lost Memory of Skin), a Finalist for the Andrew Carnegie Medal for Excellence in Fiction (Lost Memory of Skin), and twice a Pulitzer Prize Finalist (Continental Drift and Cloudsplitter).

He has taught at many universities and is the Howard G.B. Clark ’21 University Professor in the Humanities, Emeritus, at Princeton University. He was the New York State Author (2004-2008), President of the International Parliament of Writers, and the founding past-President of Cities of Refuge North America. He is a member of both the American Academy of Arts and Sciences and the American Academy of Arts and Letters. He has received seven honorary degrees and in 2014 was named an Officier de l'Ordre des Arts et des Lettres by the French Minister of Culture. Banks currently lives in upstate New York and Miami, Florida, with his wife, the poet Chase Twichell.

"Russell Banks is, word for word, idea for idea, one of the great American novelists."
author Colum McCann