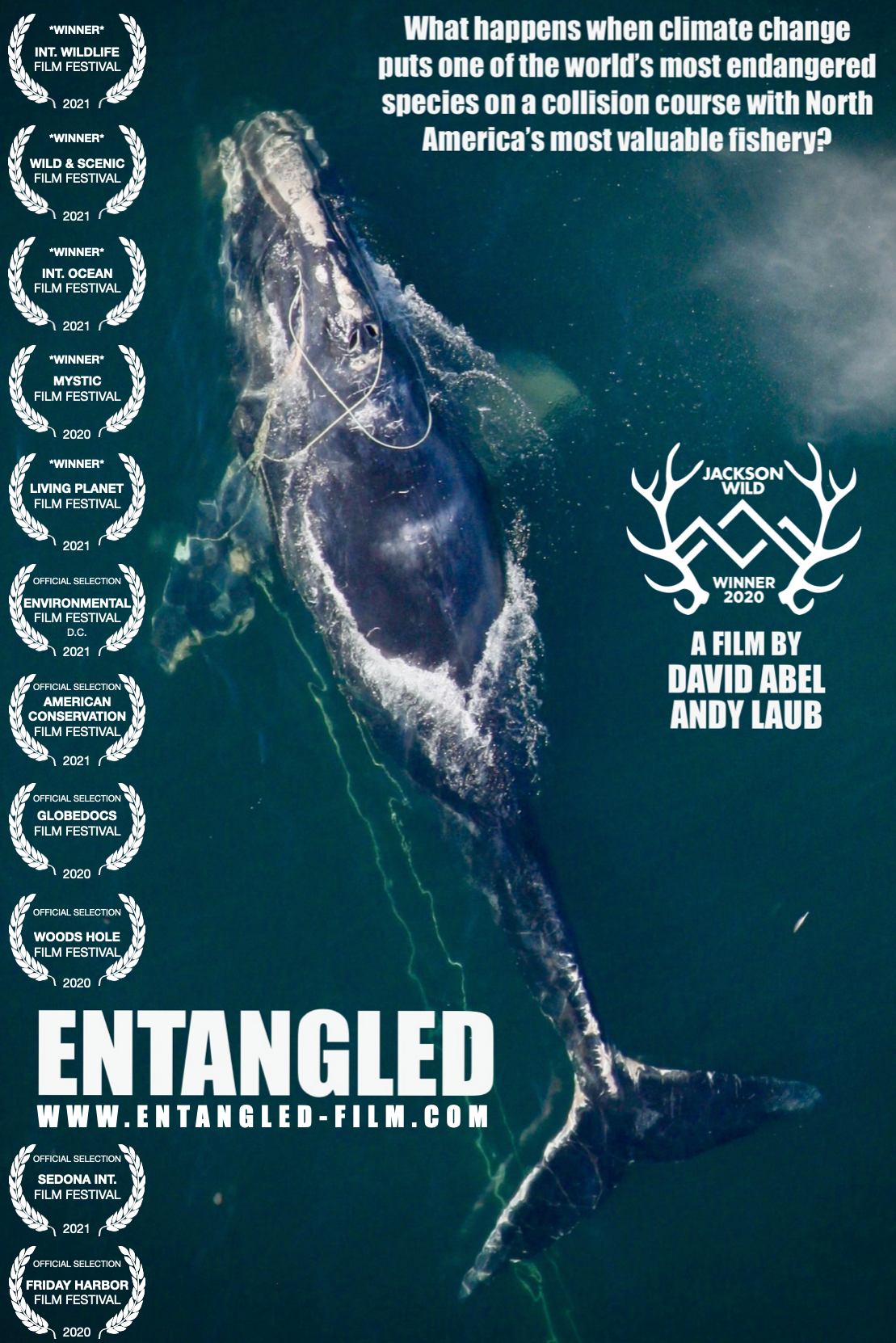 Thursday, January 27, 2022 - 6:00pm to 7:15pm
A film about how climate change has accelerated a collision between an endangered species, America’s most valuable fishery, and a federal agency mandated to protect both

This documentary film by David Abel and Andy Laub chronicles the efforts to protect North Atlantic right whales from extinction, the impacts of those efforts on the lobster industry, and how the National Marine Fisheries Service has struggled to balance the vying interests. There are now estimated to be about 350 right whales, making them among the planet’s most endangered species. The main threat to their survival, scientists say: millions of lobster lines that stretch from New England up through Atlantic Canada, standard gear for North America’s most valuable fishery. Exacerbating that threat is climate change, which has sparked a collapse in the whale’s food supply in the warming waters of the Gulf of Maine, forcing them to search for food in areas where they had rarely been seen before. As a result, their population has been plummeting.

In recent years, deaths of right whales have spiked while births have fallen sharply. In 2018, no calves were born — an unprecedented observation — while the previous year, a record 17 were found dead. In 2019, 10 right whales died, the second most ever recorded. NOAA officials say the population can’t sustain more than a single premature death a year. At the current rate of decline, scientists say the whales could go extinct within 20 years. Now, under pressure from lawsuits by environmental advocates to reduce right whale deaths, the federal government has been considering controversial regulations that pit the region’s politically powerful lobstermen against scientists and environmental advocates trying to save the whales. The proposed regulations, which could reduce lobster lines by half in much of the Gulf of Maine and harm the livelihoods of many lobstermen, has sparked a political backlash. The future of the iconic species hangs in the balance.

The decline of right whales comes as the Gulf of Maine has been warming faster than nearly any other body of water on the planet. Since 2010, the temperature in the Gulf of Maine has been above average 92 percent of the time, and at “heatwave" levels for 55 percent of the time. That has led to a collapse in the population of calanus, a small crustacean that is the whales’ main source of food. Recent studies have found that calanus colonies have declined by as much as 90 percent in parts of the Gulf of Maine. As a result, the whales have been migrating north in search of new food sources, making it harder to protect them. In 2017, right whales were recorded for the first time in large numbers in the Gulf of St. Lawrence in Canada. Twelve died there, many of them from entanglements in fishing lines. In 2019, nine of the deaths were in Canadian waters. The tenth death, found off the coast of New York, was last seen entangled in fishing gear in the Gulf of St. Lawrence. Officials in both countries are searching for ways to protect the whales. Canada has imposed a raft of new regulations, including closing off some migration routes and feeding grounds to ship traffic and fishing. In the United States, in addition to the proposal to reduce lobster lines, officials are considering requiring lobstermen to use weaker rope, which would be more likely to break if a whale becomes entangled. Both countries are also testing a new technology that could dampen the conflict and secure a brighter future for right whales: ropeless fishing systems that use remote-controlled, balloon-like devices to bring traps to the surface. But the potential remedies are controversial: Lobstermen say they would be too expensive and risk wrecking their livelihoods. They have launched an aggressive campaign to fight the proposals, holding rallies and using their political power to sway decision-makers. This 75-minute film has become more urgent in the wake of a landmark report in 2019 by the United Nations that found more than a million species are at risk of extinction by the end of the century. North Atlantic right whales are at the top of that list.

This is a featured event to enhance the ONE BOOK STEAMBOAT community reading of The Ministry for the Future.