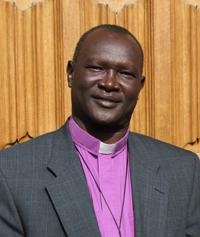 The Rt. Rev. Andudu Adam Elnail is Bishop of Kadugli Diocese in the Nuba Mountains of Sudan. At the time he was consecrated, in 2002, he was the youngest bishop in the Anglican Communion. The diocese is located in the Southern Kordofan State in central Sudan.

In the Spring of 2011, Bishop Andudu came to the United States for medical treatment and while he was here, the national government began attacks in June on the people of the Nuba Mountains in South Kordofan State.  The town of Kadugli was targeted and his office, the church and school buildings, and equipment were all destroyed or confiscated.  Bombing of civilians as well as military incursions have been ongoing until this date.  The people are being starved and many have fled south to refugee camps in the new Republic of South Sudan.  Bishop Andudu was targeted by the government for assassination and he has since been granted asylum by the United States government.

Since 2004, when Bishop Andudu was selected as chairman for the Christian and Muslim Dialogue Committee in the Nuba Mountains Region, he has conducted many workshops devoted to building mutual understanding and coexistence in communities. He has testified before committees of Congress and has briefed United Nations commissions during the past year.  Bishop Andudu devotes his life to being a fulltime advocate for his people, to call for peace initiatives and political solutions to the crisis and to raising funds to support schools and maintain agricultural development in the refugee camps.

In recent months he has traveled to the UK and returned to South Sudan in order to convene his clergy leaders in exile.He and his wife, whom he married in 1995, have five children.

The evening is free, however donations will gratefully be accepted for the Bishop's efforts to support the needs of the displaced people of the Nuba Mountains. The Bishop is primarily focused on paying teachers in the refugee camps in order to maintain continuity in the educational life of the displaced youth and minimize the disruption on long term effects for their future.

Learn more about the current state of affairs in the war-torn Nuba Mountains of Sudan. 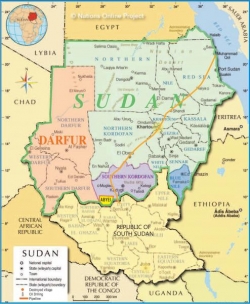 Fleeing From Genocide to South Sudan ~ October 2012, photos and updates from the Yida Refugee Camp

Director Daniel Bogado has received a Rory Peck Award for his documentary on the largely hidden war taking place in Sudan's Nuba mountains. His film, Terror in Sudan, showed how thousands of people have been forced to shelter in caves to avoid government airstrikes. Watch the BBC news report from Nov. 30, 2012 about this documentary, and watch the entire 24-minute film Terror in Sudan here.