Home » Events » Mandala on the Yampa

The Mystical Arts of Tibet is a world tour endorsed by His Holiness the Dalai Lama to promote world peace and healing by sharing Tibet’s rich and authentic sacred performing and visual arts with modern audiences.  The tours offer a rare opportunity to witness one of the world’s most ancient sacred traditions presented by a group of monk artists for whom these traditions are a way of life.

The artists are monks from Drepung Loseling Monastery, which has been re-established in exile in South India. The performers on The Mystical Arts of Tibet tour are not full-time professionals; rather they are genuine monks who are taking time off from their life-long devotion to contemplation and study to participate in the tour. These monk artists consider it an honor to be selected to represent their monastery and share their cultural traditions on the tour, hoping that they will be able to make some small contribution toward world peace and toward greater awareness of the Tibetan situation. At the end of each tour the monks return to Drepung Loseling Monastery to continue their vocation.

Drepung Monastery was established near Lhasa, Tibet in 1416 by Chojey Tashi Palden. It had four departments, of which Loseling, or "The Hermitage of the Radiant Mind," was the largest, housing more than three quarters of Drepung's 10,000 to 15,000 monks. Drepung Loseling was especially close to the Dalai Lama incarnations; the Second Dalai Lama made his residence here in 1494, and subsequent incarnations maintained this link.

After the Chinese Communist invasion of Tibet in 1959 and the forced closure and destruction of its 6,500 monasteries, some 250 monks from Loseling managed to escape the holocaust and rebuild their institution in Karnataka State, South India. The traditional training program was thus preserved. Over the years many more young spiritual aspirants have fled Chinese-occupied Tibet and sought entrance into the monastery, thus helping to preserve their traditional culture. The number of monks presently in the re-established Drepung Loseling has increased to more than 2,500.

In 1991, as a result of The Mystical Arts of Tibet tours, the monks were invited to establish a seat in North America. Thus Drepung Loseling Monastery, Inc. was born in Atlanta, Georgia. A non-profit organization dedicated to the study and preservation of the Tibetan Buddhist tradition of wisdom and compassion and a center for the cultivation of both heart and intellect, Drepung Loseling provides a sanctuary for nurturing inner peace, community understanding, and global healing. In 1998 Drepung Loseling and its North American seat established academic affiliation with Emory University with the objective of promoting trans cultural understanding and scholarly interchange. This historic affiliation between two major institutions of learning was inaugurated by His Holiness the Dalai Lama on May 12, 1998.

In addition to its academic and spiritual programs, Drepung Loseling is committed to helping preserve the endangered Tibetan culture, which today leads a fragile existence in the exiled refugee communities in India and Nepal.  It coordinates The Mystical Arts of Tibet World Tours and oversees the Drepung Loseling Educational Fund, a sponsorship program for the adoption of monks in training at Drepung Loseling Monastery.

About Mandala on the Yampa 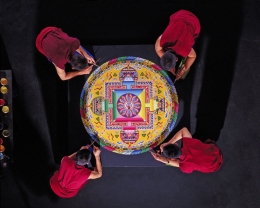